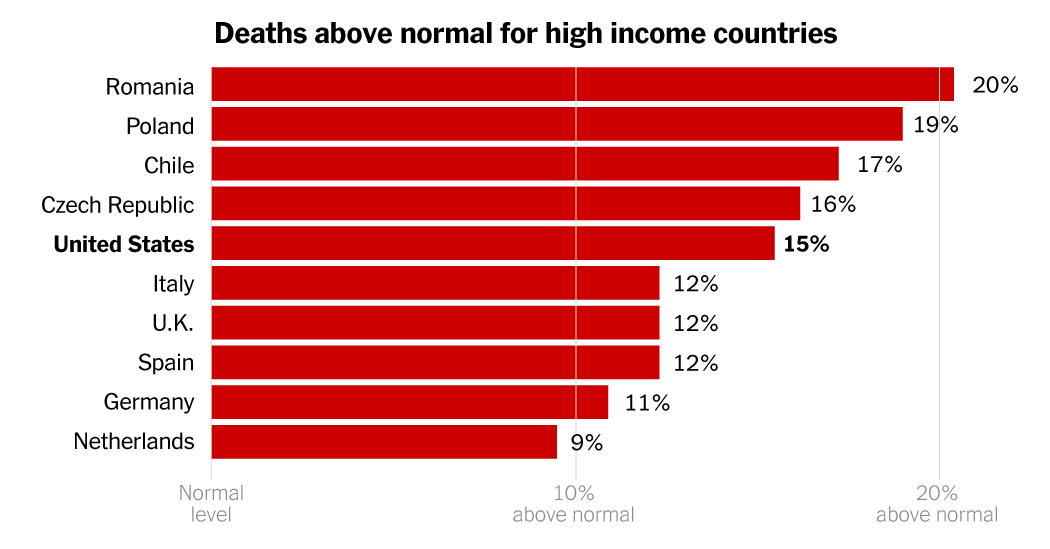 The United States had more deaths above normal levels during the pandemic than most other wealthy countries, according to data released by the World Health Organization this month. U.S. deaths were 15 percent above normal — a number surpassed by only four other large countries in the same income group: Chile, the Czech Republic, Poland and Romania.

Notes: Only countries with populations greater than 10 million are included. Country income data is from the World Bank Atlas.

Globally, many poorer and developing countries fared worse than the wealthiest ones, but deaths in the United States rose even higher than in several countries with far fewer resources, including Argentina and the Philippines.

Throughout the pandemic, the United States and other wealthy countries have had access to the lion’s share of lifesaving supplies such as vaccines, antiviral treatments, masks and testing kits. While most rich countries also have a relatively older and more vulnerable segment of their population, they also had access to economic support and policies.

Some of the countries with the largest increase in death rates during the first two years of the pandemic were those in the upper-middle-income groups: Ecuador, Mexico and Peru. But many countries with the lowest income — including most African countries — are not included in the charts because their data is less reliable.

Some countries struggled more than others to accurately count pandemic-related deaths. W.H.O. figures show by just how much. The global toll is more than twice the number of Covid-19 deaths reported in official government calculations worldwide.

Deaths above normal greater than reported

Note: Data is for years 2020 and 2021. Only countries with populations greater than 10 million are included.

In the wealthiest countries, the gap between reported Covid-19 deaths and estimated total deaths above normal was small, perhaps because of the relatively lower number of deaths as well as existing infrastructure around death reporting.

But among upper-middle and low or lower-middle-income countries, the number of deaths above normal estimated by the W.H.O. was often many times larger than the number of reported deaths.

Across the world, about 13 percent — or 15 million more people — died than expected in the first two years of the pandemic.

These latest estimates by the W.H.O. are what many scientists say are the most reliable gauge of the total impact of the pandemic so far. The figures — often called excess deaths — measure the difference between the number of people who died in 2020 and 2021 and the number of people who would have been expected to die during that time if the pandemic had not happened. They include those who died from Covid-19 without having been tested as well as from other preventable illnesses when hospitals were overwhelmed with virus patients.

In countries like Australia, China and Japan, the number of deaths in 2020 and 2021 estimated by the W.H.O. was actually lower than normal. The W.H.O. said that some countries may have seen decreased mortality from other causes as a result of Covid-19 control measures. And because the W.H.O. relied on the death and population statistics reported in part by government agencies, some numbers could be underestimated in countries with poor reporting.

Here’s a look at how much death rates exceeded normal levels in countries with populations over 10 million:

Deaths above normal in high-income countries

Peru, which saw the highest deaths above normal among all large countries, has been a hot spot for the coronavirus since the summer of 2020.

Deaths above normal in upper-middle-income countries

In India, deaths above normal peaked in the summer of 2021, when a wave of cases strained the country’s health resources.

Deaths above normal in lower-middle or low income countries