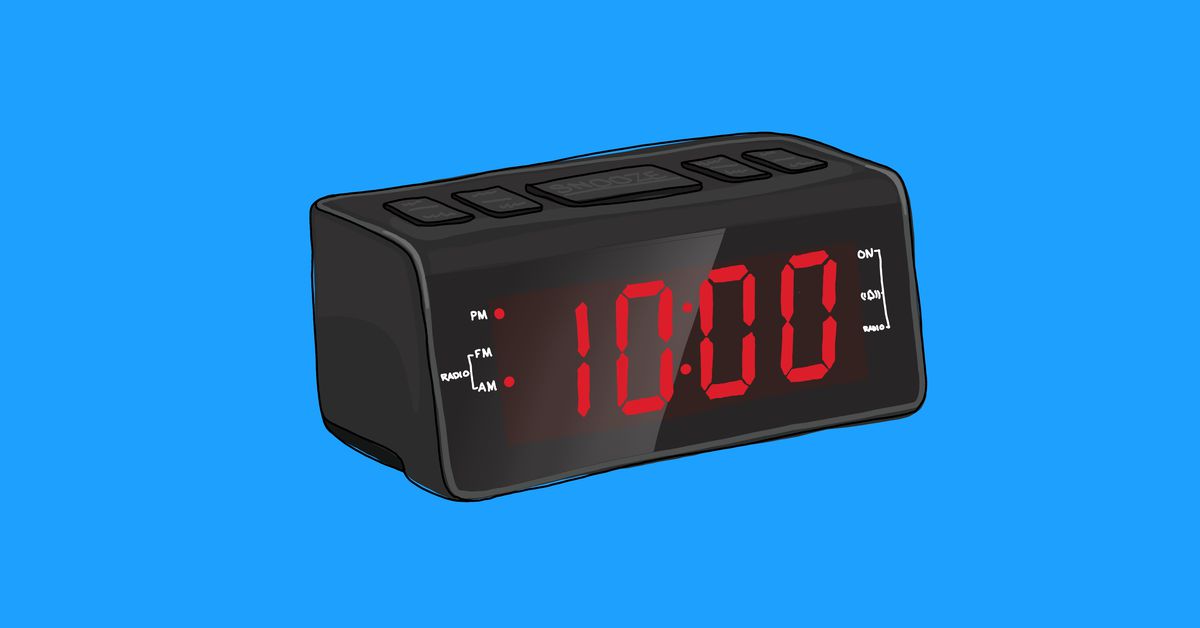 At the beginning of the movie Freaky Friday (2003), the mom character (Jamie Lee Curtis) pulls on the feet of her daughter (Lindsay Lohan) as she clings to the bars on her bed’s headboard. An alarm clock blares as they start their day with a battle of physical and mental wills. The bedside clock is small and black, with loud red digits. Its face reads 6:00 as it shrieks.

When I was in high school, I too engaged in a battle of wills each day with my mother and my alarm clock. My mom didn’t yank my feet, though. “I would put my face right down by your head and whisper in your ear and (try to) kiss your cheek,” she recalled in a recent text message. That annoyed me so much that I would eventually relent and get up. (I now find it sweet.) I remember lying in bed before school picturing this “Freaky Friday” scene, wondering what my life would be like if I had a headboard.

I have never loved waking up early. Though I recognize that it’s virtuous in some slices of our culture to wake up at dawn to rise and grind, I prefer not to do that. I famously slept through my last morning of high school. I generally strive to be responsible and on time, but waking up — especially when my apparently powerful internal clock tells me it’s not time — has historically been a challenge for me.

During the pandemic it became that much more challenging. My time became silky and slick, like an eel determined to elude my grasp. I had nowhere to be any day. I let myself sleep in later and later in the name of self-care. Each night, I went to bed early. Each morning, I woke up right before my workday needed to start. As time went on, I started to wonder if maybe I wasn’t being a little too kind to myself. Maybe I would feel better if I got up at a regular time each day and didn’t spend the 30+ minutes before and after sleep funneling blue light into my eye bulbs via my phone.

I recalled reading about how Arianna Huffington, a paragon of hustle culture, recommended tucking your phone into its own designated bed each night. Her company, Thrive, called this product a “family bed,” as it can charge up to 10 devices at once. The phones, sleeping head to toe, resemble Charlie’s grandparents in Willy Wonka & the Chocolate Factory.

My time became silky and slick, like an eel determined to elude my grasp

The phone bed can be purchased for $65 — down from its original price of $100 — on Thrive’s website. It is mini and made of wood, with white sheets and velvet and satin lining. A couple months into the pandemic, I was almost tempted to get one. I had started to dread my weekly Screen Time updates. I shielded my eyes each Sunday from the unimpeachable evidence of my minutes and hours squandered. If a calm night of sleep away from the chaos of the phone could be bought, who was I to say no?

In the end, I could not justify the phone bed. I realized I could just put my phone in a drawer for free. And while the phone bed sort of solved one problem, it didn’t solve the more immediate one: that I would need a device to wake me up if I actually wanted to sleep away from my phone.

In May of 2020, my boyfriend kindly bought me a more straightforward solution: a normal alarm clock. I started plugging in my phone in the living room each night, setting the alarm in my room, and waking up to a hideous screeching blare each morning. I felt good!

After about a year, this clock sort of stopped working. Either that, or my body again became too powerful. I started sleeping through the alarm, once waking up disoriented at 8:58 before a 9 am meeting. I brought my phone back into my room as a backup alarm, which sort of defeated the purpose of the whole enterprise.

I decided to try again with a new, nicer alarm clock. I splurged on a fancy Swiss quartz clock with excellent reviews. I found that this clock’s alarm was soft, elegant, and tasteful — and therefore useless to me. A delicate chime does not rouse me from my reverie. I require a screech. I brought my phone back into my room.

After that second failure, I figured that maybe I was hopeless. I had already made two earnest attempts at — and spent some money on — trying to be an alarm clock person. Maybe, I thought, I should resign myself to blue light and scrolling.

I sheepishly set up stricter screen time limits on my iPhone — in a moment of ambition and/or delusion, I set my Twitter limit to 15 minutes a day. As I scrolled in bed, the hourglass would pop up on my screen as an on-the-nose reminder of the passage of time, of my one wild and precious life slipping away from me in 15-minute intervals. (Apple apparently resisted using the hourglass image for a long time because they thought users wouldn’t know what it meant. I know what it means! I can waste all the time I want and the sands will keep flowing.)

The prospect of hearing more of its beeps before coffee is a true deterrent. I love it.

As the months dragged on without an alarm clock and I waded deeper into my phone each night — into Instagram highlights of random people’s moms and Wikipedia rabbit holes about the ex-husbands of various celebrities — the more I felt I needed to give an alarm clock at least one more try.

So last September, I took myself to my local hardware store and asked the sales clerk at the front if I could “see” the clock radio above the register. She didn’t know what I was talking about. I pointed to it. She said that she had never seen anyone buy one, but she got it down for me. I took it from her and went, “Hmm.” She said that I could always return it later if I didn’t like it.

I bought it! For $17.59 I had a new, normal alarm clock radio. It has a little black AM/FM cable that reminds me of a rat tail, a removable power cord, and loud, red digits that tell me the time.

My third clock is assertively not the Wirecutter recommended pick. It’s unsexy and utilitarian. It has two alarm settings. I can make a beep go off on AL-1, then get a local radio station blasting via AL-2 a few minutes later. I can snooze it many times — though I find I wish to less and less lately. The prospect of hearing more of its beeps before coffee is a true deterrent. I love it.

This object hasn’t been without its challenges. For the first few weeks I had it, I couldn’t figure out how to turn off the alarm. So I unplugged it each morning and reset it each night. I read recently that, “Before electricity, London clockmakers used to send assistants to the Greenwich observatory with pocket watches to get the exact time and bring it back, like hot soup in a takeout container.” I felt like one of those soup assistants as I flipped between my phone clock and my new clock, trying to align the latter to the exact right time.

The clock keeps moving even if I don’t feel like it. It reflects a socially agreed-upon version of reality.

The constant resetting was a pain, but also an opportunity to reflect on the nature of time, and how I have ultimate power to control how it is distributed (via this clock) but not how it flows onward (everywhere else). I was tickled by the feeling that I got to decide what time it was.

Time only moves one direction on my alarm clock, as in life. It is humbling to know that if I miss my target minute, I have to go all the way back through all the possible times again. The gulf between 2:59 and 3 is vast, as is that between 8:05 and 8:04.

As I unplug and reset, I contemplate time and what I know about it. Time is money. Time is up. A flat circle. Of the essence. It’s also an imposed system. An instrument of social control! A benchmark for productivity. A commodity. A social contract. A scourge. A metaphor. A philosophical conundrum. The bedrock of capitalism. “The key-machine of the modern industrial age.” It is both naturally occurring (see: the sun, “biological clock”) and constructed by humans. It flies when we’re having fun, and weirdly compresses and blooms and clusters and disperses when we are two years into a pandemic.

My little clock holds all of this (sort of)! And I get to set it! That is a wonder to me. James Gleick, a science journalist, wrote last year that “Far from anchoring us in time, clocks cast us loose from the past, dislocate us from our natural sensation of continuity.” To him, clocks make visible each moment replacing the prior. The clock keeps moving even if I don’t feel like it. It reflects a socially agreed-upon version of reality. I am glad to be an active participant.

My alarm clock is rich: It is a locus of metaphor and dislocation and social history imbued with unique power. But it’s also just a cheap device from the hardware store. I’m happy that it wakes me up.

After weeks of resetting my clock, I eventually just read the paper instruction manual that came in the box. I learned how to operate the device properly. It was actually very simple.

Lora Kelley is on the editorial staff of The New York Times Opinion section.