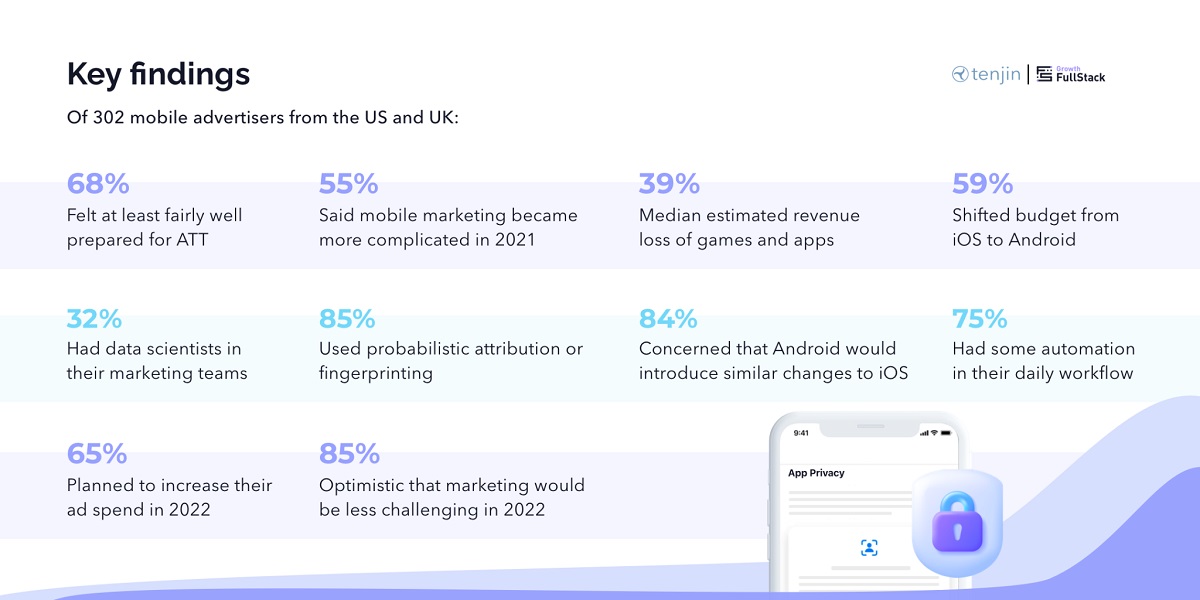 Interested in learning what’s next for the gaming industry? Join gaming executives to discuss emerging parts of the industry this October at GamesBeat Summit Next. Learn more.

A year after Apple shook up mobile advertising, companies are still in a “zombified” state when it comes to effectively finding mobile users through advertising, Tenjin and Growth FullStack said in a report today.

A year ago, Apple prioritized privacy over targeted advertising by making changes to how users opted in with the Identifier for Advertisers (IDFA). The result was fewer people agreed to be tracked and that made it harder to target them with ads.

Mobile games advertisers felt the impact of Apple’s privacy-first changes most keenly of all. They were more convinced that mobile marketing became more difficult in 2021 (gaming 68% vs 43% non-gaming), more likely to shift budget to Android (63% vs 48%), and use attribution methods such as probabilistic attribution or fingerprinting (91% vs 70%).

The companies released their initial findings in March and now they have a full white paper available. Tenjin is a mobile measurement platform for indie and mid-sized mobile game publishers, while Growth FullStack is a platform powering custom business intelligence for mobile advertisers.

With billions of people shopping, socializing, scrolling and, of course, gaming on mobile for up to a third of their waking moments, it’s hardly surprising that mobile ad spend reached a spectacular $300 billion in 2021. This amount could hit as much as $350 billion in 2022, reflecting the strength of an industry boosted by permanent changes to user behavior brought about by the global COVID-19 pandemic, the companies said.

Yet, for an industry that is so accustomed to knowing whom its dollars target and the return on investment they deliver with pinpoint granularity, the last year has been a rude awakening, they said. Privacy-first changes have forever altered familiar ways of targeting and measuring ad performance, particularly on what is often seen as the most lucrative ecosystem of them all – Apple’s iOS.

Between the doomsaying predictions and a picture of booming ad spend, the reality mobile advertisers are operating in is much more nuanced. Tenjin and Growth FullStack wanted to drill deeper and commissioned market research agency Atomik Research to conduct an online survey of more than 302 mobile advertisers in the UK and US.

“While the ‘appocalypse’ may not have materialized as first predicted, our research shows that there are indeed some tectonic shifts underway,” said Christopher Farm, Tenjin CEO, in a statement. “The reality is that the full ramifications of privacy-first marketing aren’t yet understood, even by people like us who spend their days entirely focused on deciphering them and coming up with solutions.”

Among the key findings, the report said that despite feeling reasonably well prepared for Apple’s privacy changes (53% fairly, 15% very), the majority (55%) of mobile advertisers say that mobile advertising became more difficult in 2021. This had a considerable negative impact on advertisers’ revenues. The median estimated revenue loss due to Apple’s privacy changes was 39%.

Mobile advertisers are using a patchwork of strategies to achieve success. About 85% used probabilistic attribution or fingerprinting in 2022, despite more than three-quarters (77%) expecting Apple to clamp down on fingerprinting.

Making the most of Apple’s anonymized SKAdNetwork data — a kind of replacement for the Identifier for Advertisers that has more obvious opt-in choices now — is a challenge for mobile advertisers. Few (32%) of companies have access to in-house data science talent, but three-quarters (75%) have implemented some form of marketing automation to gain insight from large, disparate datasets.

Despite a tough 2021, mobile advertisers are largely positive and bullish. Some 85% were optimistic that marketing would be less challenging in 2022, while almost two-thirds (65%) planned to increase rather than decrease their ad spend.

“Mobile marketing can be best characterized as in a zombified state that’s somewhere between the familiar era of unrestricted targeting and the new, privacy-first one,” Farm said. “The sustainability of the current patchwork model remains to be seen. It’s likely that, in the not too distant future, committing to understanding SKAN will become imperative rather than optional.”

He added, “And yet, despite a rough 2021 for mobile advertisers’ bottom lines, and with more change ahead, our research shows that advertisers’ optimism remains strong. After all, one thing is unchanged: the best mobile content and services are in high demand from billions of people the world over, on both iOS and Android.”

The research fieldwork took place with 302 companies with no known affiliation to Tenjin or Growth FullStack, and was conducted by Atomik Research, an independent creative market research agency that employs MRS-certified researchers and abides to MRS code.

GamesBeat’s creed when covering the game industry is “where passion meets business.” What does this mean? We want to tell you how the news matters to you — not just as a decision-maker at a game studio, but also as a fan of games. Whether you read our articles, listen to our podcasts, or watch our videos, GamesBeat will help you learn about the industry and enjoy engaging with it. Learn more about membership.