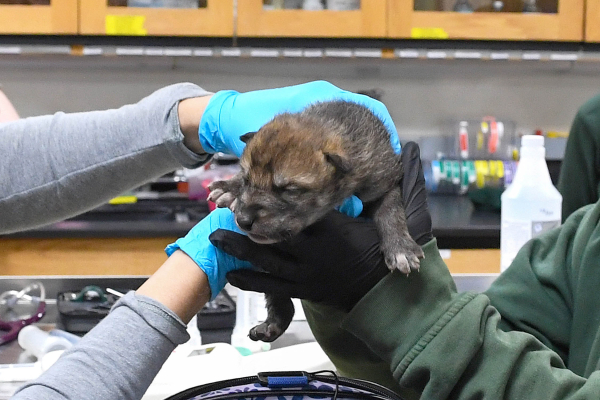 Brookfield, Ill. — The Chicago Zoological Society (CZS), which manages Brookfield Zoo, is thrilled to announce the birth of five Mexican wolves. The litter was born on April 26 to 3-year-old Vivilette. Two of the month-old male pups have begun to venture out of their den to explore their surroundings at the zoo’s Regenstein Wolf Woods habitat, while their three siblings were released to the wild as part of the U.S. Fish and Wildlife Service’s (USFWS) Mexican Wolf Recovery Plan. 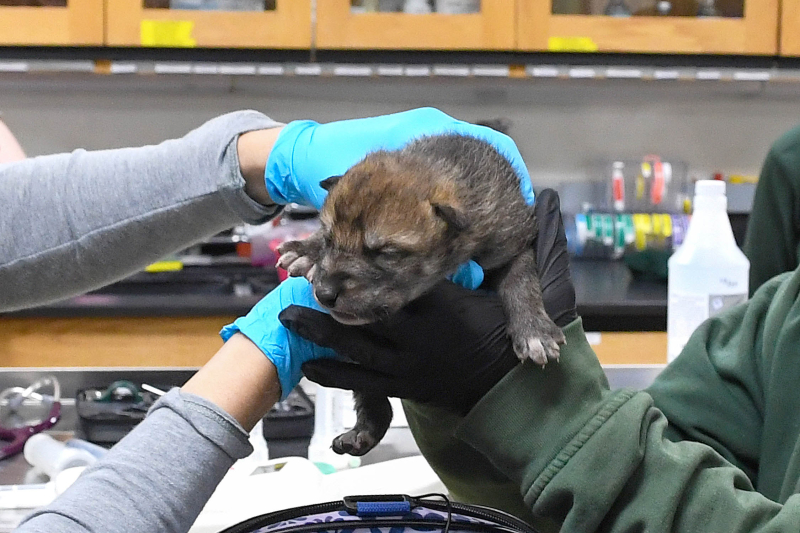 To enhance the genetic diversity of the wild population, USFWS recommended three of the pups from Brookfield Zoo’s litter become part of the fostering program. On May 5, a Chicago Zoological Society senior veterinary technician and lead animal care specialist accompanied the 10-day-old pups—two males and one female—on a flight to New Mexico, courtesy of LightHawk Conservation Flying, a nonprofit organization that partners pilots with organizations to help transfer endangered species to new homes among other conservation projects. The pups were then successfully placed in the den of the Whitewater Canyon wolf pack by the Mexican Wolf Interagency Field Team. 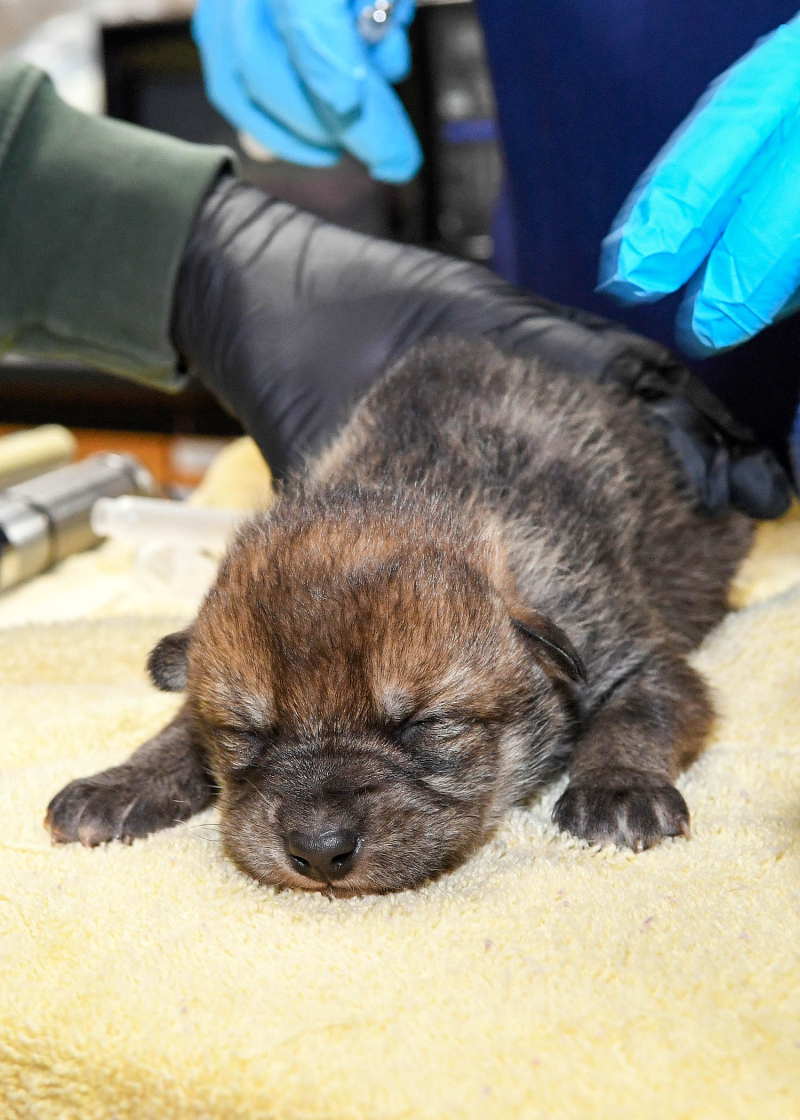 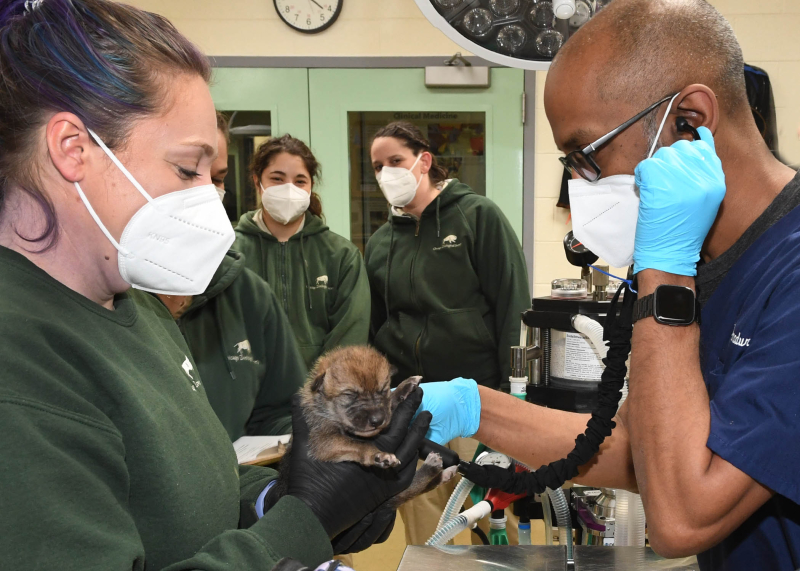 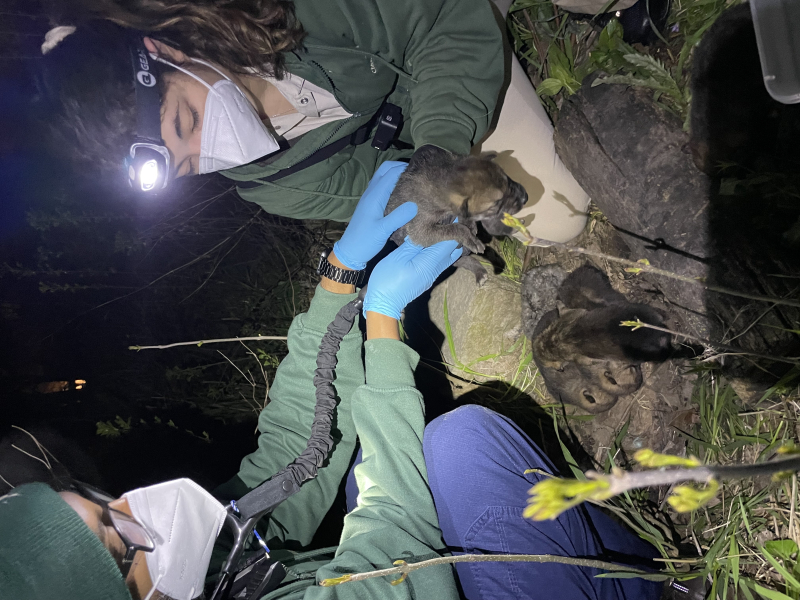 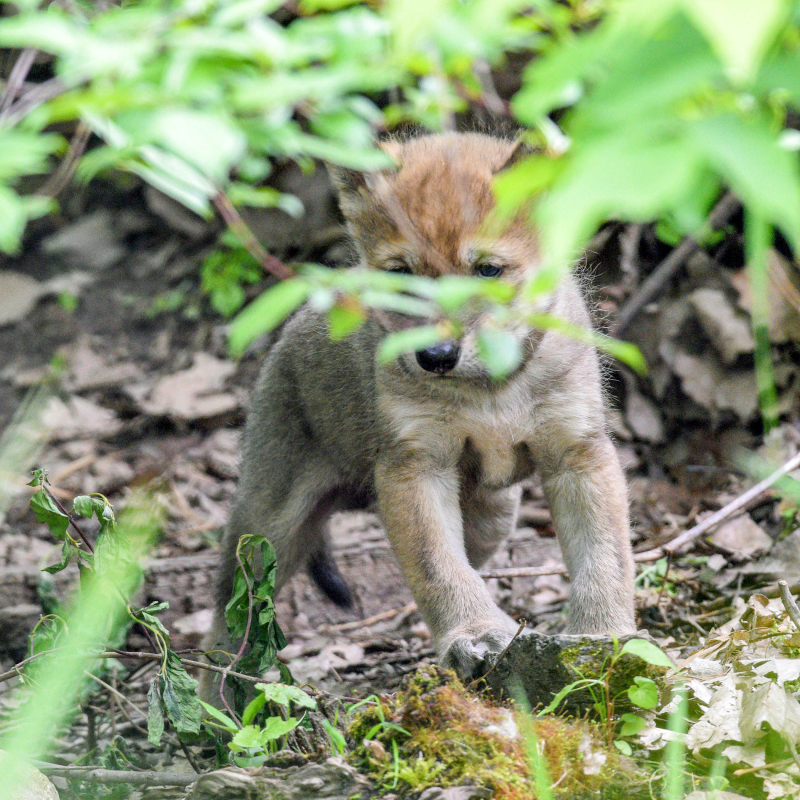 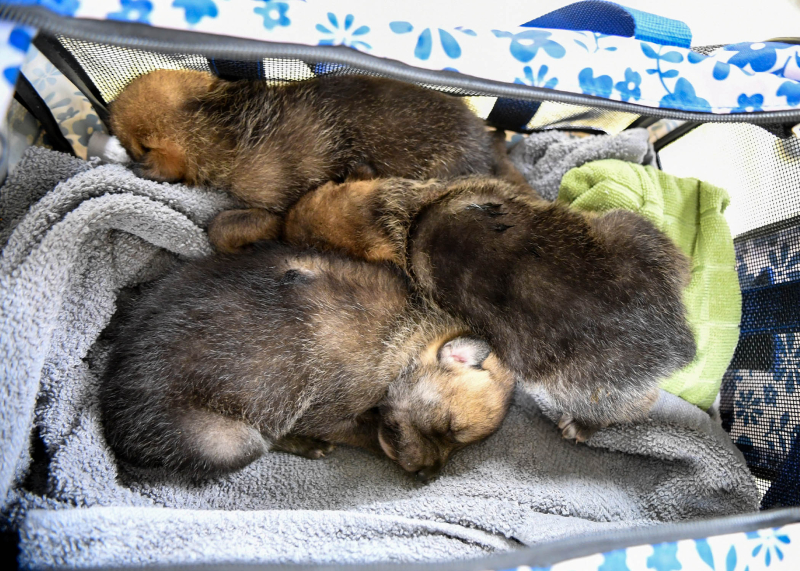 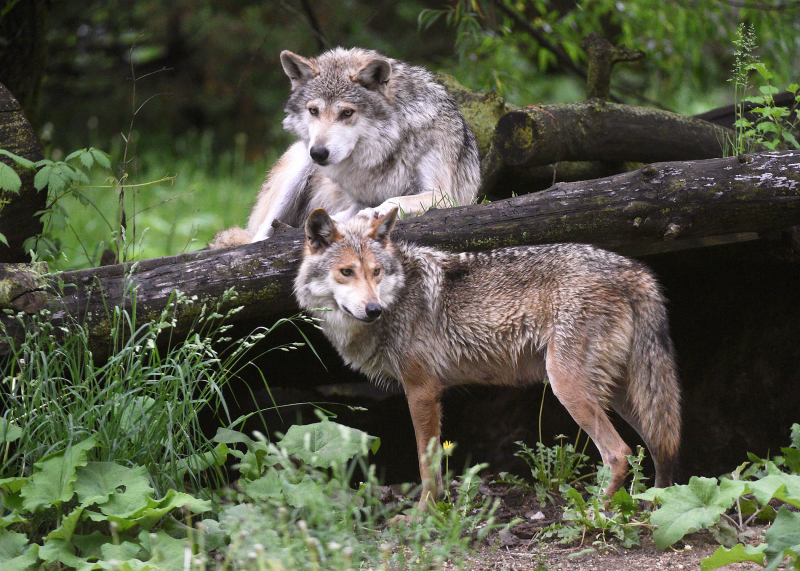 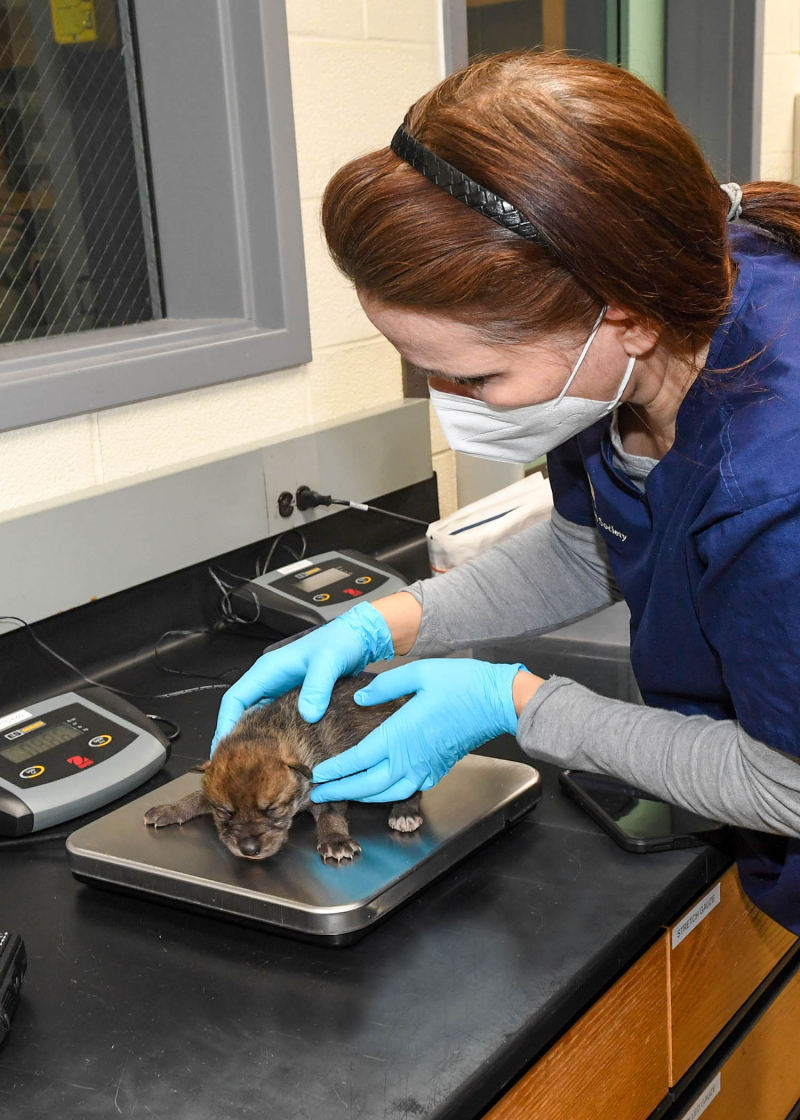 This year’s fostering is not the first time that pups born at Brookfield Zoo have been placed with a wild pack. The Chicago Zoological Society participated in a fostering in 2016 and a cross-fostering in 2017. In the latter instance, pups from Brookfield Zoo were fostered by a wild wolf pack and pups born in the wild were brought to Brookfield Zoo and raised by its pack. To date, two of the pups placed in wild packs have been confirmed to be alive and reproducing, which is a significant contribution to Mexican wolf recovery in the wild. A pup born in 2016 is the breeding male of the Prime Canyon pack, producing several litters with many of the pups surviving. The other, born in 2017, is the breeding female of the Leon pack and has reproduced two litters.

“Fostering wolves from under managed care into wild dens is helping us recover Mexican wolves by improving the genetic health of the wild population,” said Maggie Dwire, deputy Mexican wolf recovery coordinator for the U.S. Fish and Wildlife Service. “The staff at Brookfield Zoo did an incredible job ensuring the three pups from their facility stayed safe, warm, and well-cared for on their journey to the wild. Thanks to the tremendous efforts of our partners, including Brookfield Zoo, we fostered a total of 11 pups into the wild this year.”

Vivilette, a first-time mother, and her mate, 9-year-old Amigo, arrived at Brookfield Zoo in 2020 and 2021, respectively, as part of the USFWS’s Mexican Wolf Recovery Plan. Since 2003, the Chicago Zoological Society (CZS), which manages Brookfield Zoo, has been a partner in the multi-agency endeavor with an objective to re-establish the Mexican wolf population in its native habitat of the southwestern United States and Mexico.

“We are very excited to continue to be part of this program, which is making strides to repopulate an iconic species that was once extirpated in the wild,” said Joan Daniels, senior curator of mammals for CZS. “This summer, those who visit Brookfield Zoo will be able to see firsthand the interactions between the members of the wolf pack, and will hopefully foster a better understanding of this charismatic species and the important role it plays in the ecosystem.”

Like domestic dogs, wolf pups are born deaf and their eyes are closed. At about two weeks old their eyes open, and a week or so later, they begin to appear outside the den. Once they are weaned at around 6 to 8 weeks, guests visiting the zoo might see the parents regurgitating food for the pups. To get the attention of mom and dad to feed them, the pups may be seen whining, nudging, nibbling, or licking the face and corners of the adults’ mouths. As the pups get more adventurous, they will begin exploring more of their habitat and pouncing and play-fighting with one another.

According to the Interagency Field Team that conducted ground and aerial counts this past winter, there are nearly 200 Mexican wolves in Arizona and New Mexico. And, Mexican officials reported at least an additional 40 individuals in Mexico, which just celebrated its 10th anniversary of releasing wolves to the wild.

Mexican wolves are the rarest subspecies of gray wolves in North America. Approximately 4,000 wolves once lived in their historic range, which included central and northern Mexico and the southwestern United States. In May 1976, USFWS added the species to the Endangered Species List. From the 1980s until 1998, when reintroduction efforts began, Mexican wolves were considered extinct in the wild. Their demise, which began in the early 1900s, was the result of antipredator campaigns in the United States and Mexico.