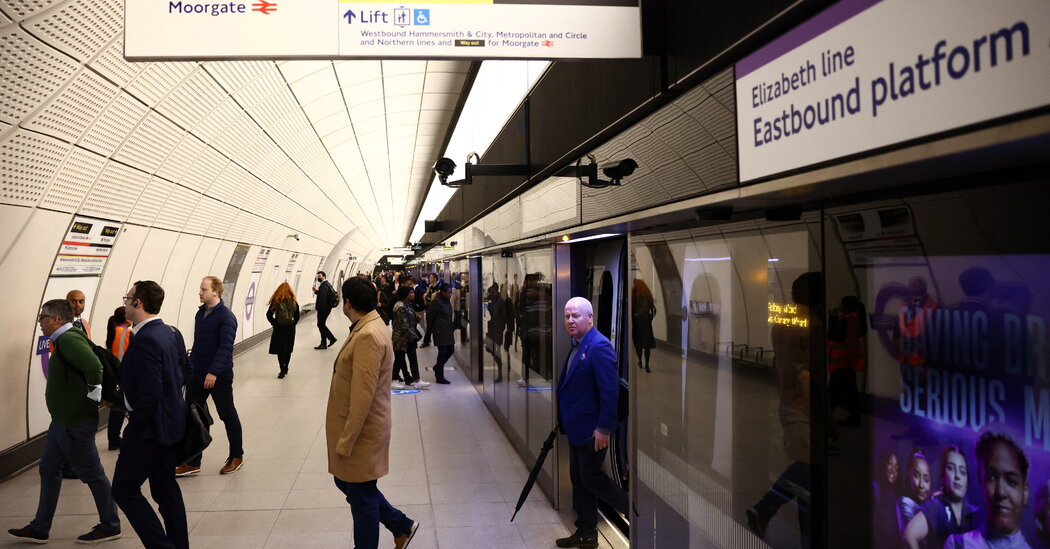 LONDON — Trainspotters and public transport enthusiasts crowded outside futuristic stations across London on Tuesday morning, lining up for hours to wait for a first glimpse of the latest addition to the city’s famed tube system.

The Elizabeth line officially opened at 6:30 a.m., after years of construction, a number of delays and a skyrocketing price tag of more than $22 billion, allowing Londoners to board its trains and walk its cavernous halls.

Among the dozens who rode the first train was Prateek Karandikar, 33, a public transport aficionado who lives in central London. He awoke before dawn to get there on time and, like other fans who came, dressed in head-to-toe purple — the official color of the Elizabeth line.

“The Elizabeth line is the most significant thing to happen to London’s transport for the last few decades,” Mr. Karandikar said. “So I just knew I had to be there on the first train to see it.”

Curiosity, and even a bit of wonder, led commuters to crane their heads to look down newly opened passageways that had long been blocked by barriers.

The line, also known as the Crossrail, has been 13 years in the making, and will eventually run for more than 62 miles, extending east and west beyond the city limits. Now, the line is partially operating, with full service scheduled to begin in May 2023. When it is fully operational, it will be the longest east line train and increase central London’s rail capacity by 10 percent, the largest single increase in more than 70 years.

The line opened a week before national celebrations of the Platinum Jubilee of Queen Elizabeth II, the railway’s namesake, who made a surprise visit to the Elizabeth line at Paddington Station last week.

On Tuesday, wide-eyed Londoners looked up to the cavernous ceilings of the stations, taking it all in. Tube workers were scattered throughout, giving directions.

Alison Heard-Mayer, 42, and her husband, Philip Heard-Mayer, 50, left their home in north London at 4:30 a.m. to be among the first passengers on the line. The opening, which had been delayed for years, coincided with Mr. Heard-Mayer’s birthday, and he described the new line as a “real game changer.”

“It was a really lovely atmosphere on the train, much more than I anticipated,” he said about that first journey. “We’ve all been avoiding the tube for the past two years, so it’s nice to see these new stations.”

He added: “It’s just the scale of it,” as he looked up at the high ceilings.

Ms. Heard-Mayer, who uses a forearm crutch, said the step-free access in the Elizabeth line stations gave her peace of mind.

“Now, you don’t have to worry about the stairs when you get off,” she said.

The line, which has 41 stations that are step-free to the platform level, 10 of which are new, is seen as a major improvement for those with accessibility needs.

Brendon Taylor, 18, a disability rights campaigner from Bristol who uses a wheelchair, described his Tuesday morning journey as “mind-blowing.” He awoke at 3:50 a.m. to travel to London for the experience.

“It’s got platform-edge doors, so it makes wheelchair boarding a hell of a lot easier,” he said. “And it’s going to cut journey times especially for disabled passengers.”

Crosstown journeys plotted in convoluted routes to avoid steps would be slashed from hours to minutes, he said, and the spacious new trains and platforms were easier to navigate.

“This is a real milestone,” Mr. Taylor said, adding that even more accessibility is needed in Britain.

The opening day wasn’t without drama. The Elizabeth line branch of Paddington Station had to be evacuated around 8:30 a.m., when a fire alarm was triggered. But service soon returned to normal.

Lisa Jaggard, 68, and Richard Jaggard, 71, who live north of London, were taking the train from Liverpool Street Station west toward Paddington Station, luggage in tow.

A historic visit. On May 18, 1965, Elizabeth arrived in Bonn on the first state visit by a British monarch to Germany in more than 50 years. The trip formally sealed the reconciliation between the two nations following the world wars.

First grandchild. In 1977, the queen stepped into the role of grandmother for the first time, after Princess Anne gave birth to a son, Peter. Elizabeth’s four children have given her a total of eight grandchildren, who have been followed by several great-grandchildren.

Princess Diana’s death. In a rare televised broadcast ahead of Diana’s funeral in 1997, Queen Elizabeth remembered the Princess of Wales, who died in a car crash in Paris at age 36, as “an exceptional and gifted human being.”

A trip to Ireland. In May 2011, the queen visited the Irish Republic, whose troubled relationship with the British monarchy spanned centuries. The trip, infused with powerful symbols of reconciliation, is considered one of the most politically freighted trips of Elizabeth’s reign.

Breaking a record. As of 5:30 p.m. British time on Sept. 9, 2015, Elizabeth II became Britain’s longest-reigning monarch, surpassing Queen Victoria, her great-great-grandmother. Elizabeth was 89 at the time, and had ruled for 23,226 days, 16 hours and about 30 minutes.

Marking 70 years of marriage. On Nov. 20, 2017, the queen and Prince Philip celebrated their 70th anniversary, becoming the longest-married couple in royal history. The two wed in 1947, as the country and the world was still reeling from the atrocities of World War II.

“There’s a lot of room, and it’s a convenience more than anything,” said Mr. Jaggard, as they usually take a taxi across town.

The excitement of Oskar Bobko, 13, was audible in his voice as he stepped out of the carriage after his first journey on the Elizabeth line with his parents.

“It’s very modern,” Oskar said. He was particularly impressed by the flat-screen monitors streaming information about the status of the line above the double sliding doors. “I like the look of it.”

“It’s a pretty big moment, and I myself have been waiting seven years for this,” he said, thinking back to when he first heard about the plans for the line as a train-obsessed 6 year old.

Peter Douglas, 85, Robert Grant, 80, and Terry Ardren, 81, were eager to take a peek at the new tube line. The group has been getting together for the last 11 years to do walks in the city, but the ride was an enjoyable change of pace, they said.

“Since we are old Londoners, we can ride for free!” Mr. Grant added with a chuckle.