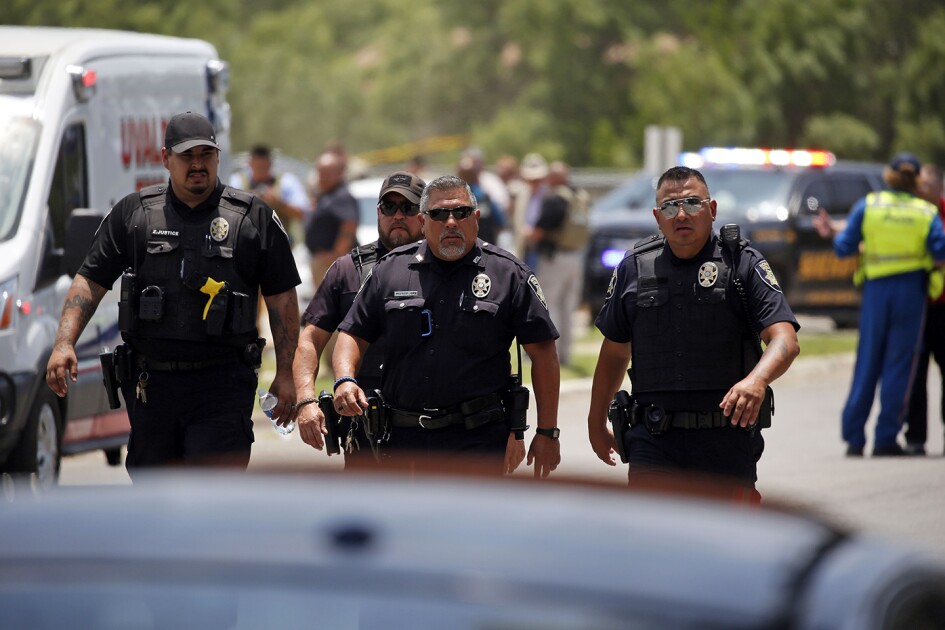 At least 19 children and two adults—one of them a teacher—are dead after a shooting at Robb Elementary School Tuesday in Uvalde, Texas.

That staggering death toll makes it the deadliest school shooting since 2012, when a gunman shot and killed 26 people as young as 6 years old at Sandy Hook Elementary School in Newtown, Conn. And fatalities exceeded those in the 2018 attack at Marjory Stoneman Douglas High School in Parkland, Fla., which left 17 dead.

Robb Elementary serves students in 2nd through 4th grade in the mostly Latino community of Uvalde, about 85 miles from San Antonio.

“When parents drop their kids off at school, they have every expectation to know that they’re going to be able to pick their child up when that school day ends. And there are families who are in mourning right now,” Texas Gov. Greg Abbott said at a news conference. “The state of Texas is in mourning with them for the reality that these parents are not going to be able to pick up their children.”

Hal Harrell, the superintendent of the Uvalde Consolidated Independent School District called the shooting “a tragic and senseless event.”

“My heart is broken,” Harrell said in a news conference. “The school year is done.”

The attack—at a school of about 600 students— was the deadliest school shooting in Texas history. It immediately spurred a fresh round of debate among educators and policymakers about gun laws, how to keep students safe and what, if anything, schools can do to be more prepared for an attack.

In an address to the nation Tuesday night, a shaken President Joe Biden called for politicians to take swift action on gun legislation.

“I am sick and tired of it. We have to act,” Biden said. “And don’t tell me we can’t have an impact on this carnage.”

The last large-scale mass shooting in the state was May 18, 2018, when a 17-year-old student shot and killed 10 people and injured 13 others at his high school in Santa Fe, Texas.

During a news conference Tuesday afternoon, Pedro Arredondo, the police chief for the Uvalde school district, did not confirm the shooting’s death toll. Arredondo only said that there were “several injuries, adults and students, and we do have some deaths” as a result of the shooting, which took place during the last week of the school year.

An 18-year-old man entered the school with a gun and opened fire, Abbott said.

“He shot and killed, horrifically, incomprehensibly, 14 students and killed a teacher,” Abbott said, several hours before the death toll rose to at least 19 students and two adults.

The New York Times reported that the teacher who died was Eva Mireles. Her aunt, Lydia Martinez Delgado, told the Times that Mireles taught 4th grade and had been teaching for 17 years.

The shooter, who died during the incident, was a resident of the community, Abbott said. The governor said the shooter was likely killed by police officers, but the incident is still being investigated.

With few details about the facts and nature of the shooting, the safety procedures at the school, or the motive of the attacker on Tuesday evening, it was unclear how policymakers may respond to the attack.

The Uvalde community focused on the immediate needs of victims, quickly coordinating an emergency blood drive to support them.

School shootings are statistically rare, and schools are relatively safe places for children, safety experts say. But larger mass shootings in schools have occurred in increasing frequency in the last 20 years, alongside an increase in mass shootings more generally.

There were 61 active shootings in the United States in 2021, the FBI said in a report released Monday, which defined an active shooting as “one or more individuals actively engaged in killing or attempting to kill people in a populated area.” That number, which includes incidents unrelated to schools, is a 50 percent increase over the previous year’s total.

Since 2018, there have been 119 shootings in American schools that injured or killed people, according to Education Week, which has tracked school shootings since that year. In that same period, the largest number of injured and killed occurred in the shooting in Parkland, where 17 died and 17 were wounded.

Most shootings at schools are smaller in scale and more targeted, according to data collected by the U.S. Department of Homeland Security dating back to 1970, which shows a growing number of incidents that include suicides, homicides, and accidental gunfire on school grounds.

But high-profile rampages carried out by active shooters during the school day tend to dominate headlines and drive school safety debates.

Following the 2018 shootings in Parkland and Santa Fe, for example, then-President Donald Trump assembled a federal school safety task force and urged schools to “harden” their buildings and arm teachers to prepare for would-be attacks.

Florida passed a broad school safety bill that required schools to have trained, armed staff or police officers on campus, and created a “red flag law,” under which judges can suspend an individual’s access to guns if they are deemed a threat to themselves or others. Texas passed new requirements for school shooter drills and mandated regular review of districts’ safety plans.

Within hours of the shooting, Texas Attorney General Ken Paxton, a Republican who faced a primary challenge in Tuesday’s election, appeared on Newsmax to suggest that training and arming school employees may help prevent deadly attacks. Texas has a school marshall program that supports such training.

“First responders often can’t get there fast enough to prevent a shooting,” Paxton said. “It typically involves very short periods of time, and you have to have people trained on campus to react.”

Some Democratic lawmakers along with education groups, like teachers’ unions, have urged action on gun laws, calling other proposals, like funding for metal detectors and security cameras, a distraction from the real issue.

President Biden, who led an unsuccessful push for new gun laws as vice president after the Sandy Hook shooting, ordered flags to be flown at half-staff.

Sen. Chris Murphy, a Democrat who represented Newtown in Congress after the 2012 attack, appeared on the Senate floor Tuesday night to push for stronger gun laws.

“Nowhere else do little kids go to school thinking they may be shot that day…,” he said. “Nowhere else does that happen except in the United States of America, and it is a choice. It is our choice to let it continue.”

In 2018, Education Week journalists began tracking shootings on K-12 school property that resulted in firearm-related injuries or deaths. There is no single right way of calculating numbers like this, and the human toll is impossible to measure. We hope only to provide reliable information to help inform discussions, debates, and paths forward.
Below, you can find big-picture data on school shootings since 2018. (This chart will be updating as new information becomes available.)

See Also: School Shootings This Year: How Many and Where