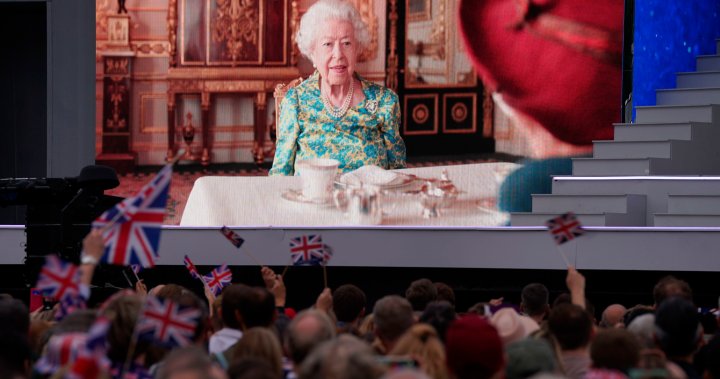 As the Queen’s Platinum Jubilee celebrations enter their final day, Governor General Mary Simon says the occasion highlights the need to reflect on an “important time” in Canada’s history.

“It’s a very important time in our history. It’s really important for her to see that she is very much appreciated. The crowds in London have been tremendous,” said Simon, who is Canada’s first Indigenous governor general.

She sat down with Global National‘s Dawna Friesen on Saturday at the Canadian high commission in London, U.K., just a short walk from where tens of thousands danced up and down The Mall for a massive party marking the jubilee later that night.

And as it turns out, Simon says she was among them.

“Yeah, of course,” she said when asked if she would be heading out to the concert outside Buckingham Palace. “I’m there for the party as well as the work.”

Simon, who is Inuk, was sworn in as governor general in July 2021 and met the Queen for the first time earlier this year when she travelled to London in March. After that meeting, Simon called the Queen an “inspiration in these difficult times” and said they had discussed the Inuit concept of “ajuinnata.”

It means “to never give up,” according to Rideau Hall.

She said there remains work to do on reconciliation with Indigenous people in Canada and that at times, that work has “stalled.” But the discovery of unmarked graves at the sites of former residential schools was a jolt to the entire country, Simon added.

“It made Canadians realize that they could actually see and feel the impact” of the schools, she said.

While the Platinum Jubilee marks the momentous occasion of 70 years on the throne — a first for a British monarch and a feat experts say no monarch is likely to achieve again — it has also renewed questions about the relevancy of the monarchy in the modern age.

Queen Elizabeth has pushed over the course of her reign to modernize the monarchy, televising her coronation and finding new ways to connect the institution with the big happenings of the day, including the 2012 London Olympics, where she made a surprise video appearance with Daniel Craig.

Those who have met her in person, though, often describe the Queen as someone with a sense of humour and a deep love for her family — a topic Simon says the two discussed when they met.

“It was a lovely visit. She was very engaged and very warm and friendly, and made me feel very comfortable in her home,” Simon said. “The whole visit to me was a time for me to be able to express to her how proud I was to be her representative in Canada.”

“She talked about her family quite a bit,” she added, “and that was very good for me because I love my grandchildren and my children.”

One of Simon’s predecessors also offered similar reflections, as well as a personal view of the Queen’s humour and personality that sparked an ongoing pen-pal relationship.

It all began when she invited David Johnson, former governor general, for a visit to her Balmoral estate in Scotland when he presented his oath of office in August 2010.

“They made us feel as if we were members of the family, and we’re there for just a pleasant weekend with them,” Johnson recalled during an interview with The West Block‘s Mercedes Stephenson.

“Then she said, as we were leaving, ‘I do read letters, you know,’ and I said, ‘Well, I will be happy to write letters to Your Majesty. And when you find that they are boring, let me know, and I’ll cease and desist.’”

“So I began the custom of writing to her almost every quarter and not a kind of diplomatic ambassador’s level, but some of the insights into what was going on in Canada and to some extent about our family,” he continued. “And she was very interested in our family.”

“And you still write to her now?” asked Stephenson.

“Yes. Less so, but yes,” Johnson said, describing the Queen as having a “wonderful sense of humour.”

With Harry and Meghan at Platinum Jubilee, is the Queen tying up ‘loose ends?’

After the trip to Balmoral, Johnson says he sent a Rideau Hall staff member on exchange to Buckingham Palace to learn more about how the palace operates and its traditions.

When the time came for the staff member to return to Canada, Johnson says the Queen asked them to pass a message on to Johnson: “‘Tell him how much I appreciate his letters, but will you give a special thanks to Miss Benmore, his executive assistant, because she typed those letters so I could read his handwriting?’”

Johnson said he hopes sharing some of the personal stories about his interactions with the Queen will not only help more Canadians understand her sense of duty to the role but also, as he put it, “her remarkable human qualities.”

“I really want people to understand that second part of her persona,” Johnson added.

While the monarchy will continue to evolve, Johnson said he often tells young people who ask him questions about whether the institution is still relevant that he has no doubts.

“I say, if you’re thinking of an alternative to a hereditary constitutional monarchy, think carefully about the alternative,” he said, pointing to the political stability in democracies with those models of government, such as Norway, Sweden, New Zealand, the U.K. and Australia.

In contrast, he said combining the powers of head of state and head of government to one person, such as in the U.S. presidential system, results in “a heavy load to carry.”