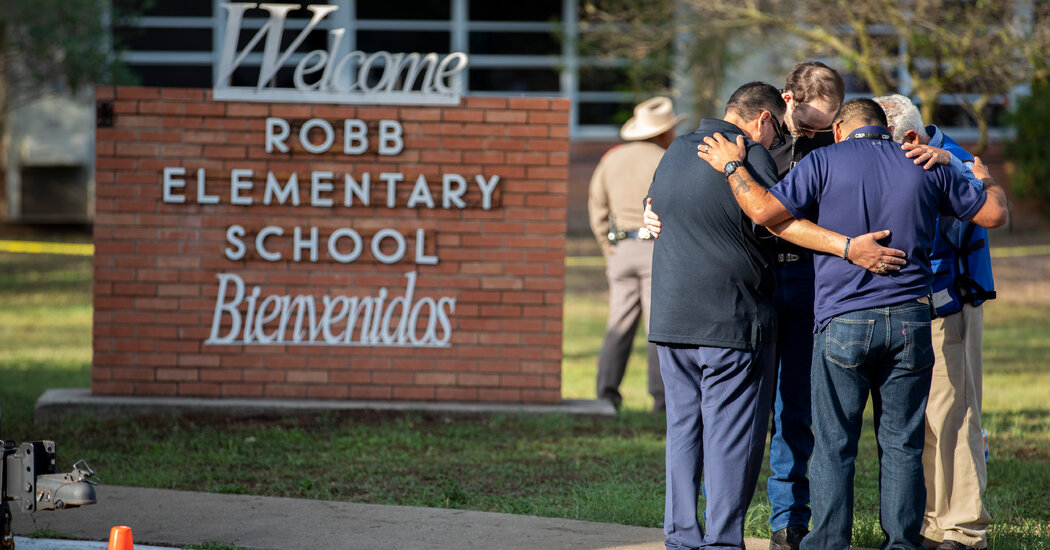 In every country, people get into arguments, hold racist views or suffer from mental health issues. But in the U.S., it is easier for those people to pick up a gun and shoot someone.

That reality is what allowed an 18-year-old to obtain an assault rifle and kill 19 children and two teachers at an elementary school classroom in Uvalde, Texas, on Tuesday. And it is what makes the U.S. a global outlier when it comes to gun violence, with more gun deaths than any of its peers.

This chart, looking at public shootings in which four or more people were killed, shows how much the U.S. stands out:

In today’s newsletter, I want to walk through three ways to think about America’s gun problem.

The number of guns

It is an intuitive idea: If guns are more available, people will use them more often. If you replaced “guns” in that sentence with another noun, it would be so obvious as to be banal.

Stricter gun laws appear to help. They are associated with fewer gun deaths, in both a domestic and global context, while looser gun laws are linked with more gun deaths.

But federal laws are lax. Other developed countries typically require at least a license to own a gun, if they allow someone to get a firearm at all. In the U.S., even a background check is not always required to buy a gun — a result of poor enforcement and legal loopholes.

The U.S. is always going to have more guns, and consequently more deaths, than other rich countries. Given the Second Amendment, mixed public opinion and a closely divided federal government, lawmakers face sharp limits on how far they can go.

But since America’s gun laws are so weak, there is a lot of room to improve — and at least cut some gun deaths.

But it is hard to say exactly how much impact these measures would have, because little good research exists on the effects of gun policies on mass shootings. One unanswered question is whether a determined gunman would find a way to bypass the laws: If he can’t use an assault rifle, would he resort to a handgun or shotgun? That could make the shooting less deadly, but not stop it altogether.

Most shootings in America never appear in national headlines. The majority of gun deaths in 2021 were suicides. Nearly half were homicides that occurred outside mass shootings; they are more typical acts of violence on streets and in homes (and most involve handguns). Mass shootings were responsible for less than 2 percent of last year’s gun deaths.

Stricter gun laws could also reduce the more common gun deaths. It all comes down to the same problem: More guns equal more gun deaths, whether a gang shootout in California, a suicide in Wyoming or a school shooting in Texas.

The latest on the shooting

Georgia’s primary results suggest that many Republican voters are ready to move on from Trump’s election lies, Gail Collins says.

“Grandfluencers”: On TikTok, the over-65 set is thriving.

Advice from Wirecutter: How to organize your cookbooks.

The end of ‘Ellen’

At its peak, “Ellen” was a ratings success, known for its playful tone, A-list celebrity interviews and cash giveaways. DeGeneres, a groundbreaking comedian, appeared in millions of living rooms daily as an openly gay person, beating the odds after coming out nearly ended her career in the ’90s.

But her legacy became more troubled in recent years. BuzzFeed News revealed that members of the show’s staff had confronted racism, fear and intimidation on set, as well as sexual harassment from producers. Warner Bros. fired three executives, and DeGeneres, whose motto was “be kind,” issued an on-air apology in 2020.

Even before the hit to her reputation — and the show’s declining ratings — DeGeneres had suggested in 2018 that she was weary of daytime TV and was preparing to leave.

“In the heyday of ‘Ellen,’ that show was a career-defining booking,” a Hollywood publicist told BuzzFeed News. Now, the publicist’s up-and-coming celebrity clients prefer spots on “The Kelly Clarkson Show” and “The Drew Barrymore Show.”

The pangram from yesterday’s Spelling Bee was taxonomy. Here is today’s puzzle — or you can play online.