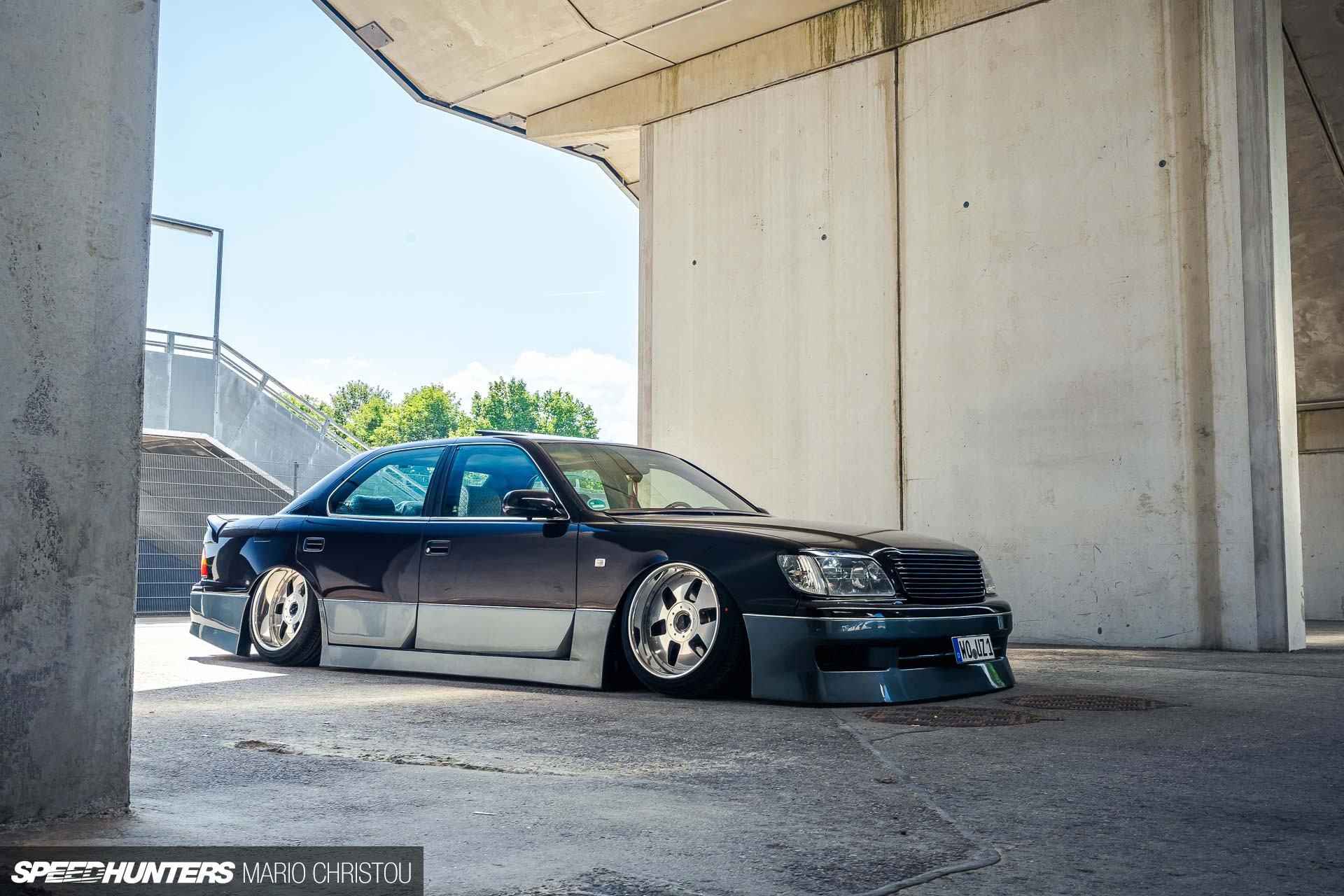 ‘Is that your BMW over there?’ the fuel station cashier asked. ‘You’re here for the tuning show, right?’

Adnan, owner of the so-called ‘BMW’, simply chuckled. He confirmed he was there for the show and politely informed the cashier it’s a Lexus, not a BMW. ‘A what?’ The cashier was confused.

According to Adnan, this is nothing new. In Germany the vast majority of cars are domestic, especially luxury cars. “There are only 30 LS 400s registered here, and I have had four,” he tells me.

Adnan traded his BMW 335i in for the first LS after a long time worrying about maintaining such a rare car. A dream was achieved, yet within an hour of ownership he was side-swiped by another driver. The LS was totalled. LS 400 number two came and went; LS number three is the one you see here; and LS number four was sold to a friend. Yes, Adnan has owned more than 10% of all the Lexus LS 400s currently in Germany.

“Most people ask me what type of Mercedes is it, to be honest. They think it’s an S-Class,” says Adnan. And being de-badged doesn’t help decipher any confusion as to what it is.

Imagine my surprise then to find the most ‘proper’ example of a VIP-style build I’ve ever encountered, in a car park in the Austrian mountains.

Adnan’s LS 400 is about as authentic as it gets, rocking a full Junction Produce body kit for starters. When I say ‘full’, I mean it includes the three-piece rear spoiler, headlight brows and even the bonnet spoiler along its trailing edge. “In Japan, the bippu guys say you have to run the full kit, or no kit. No in-between,” Adnan says. He’s even gone so far as to get ahold of Braga projector headlights and both Braga LED and OEM clear tail lights, although he had pristine OEM items fitted at Wörthersee.

Before he fell down the VIP rabbit hole, Adnan’s vision for the LS was simpler: “I was going to stay original body and drop the car on the wheels. Then I saw an Aimgain body kit for sale and I thought f*ck it.” This was the start of the slippery slope to the car you see now.

Whilst the kit may have changed, the wheel choice has been consistent. Legendary in VIP circles, the SSR Vienna Kreis measure 18×10-inch front and rear, but with staggered offsets of ET-2 and -9 respectively. Adnan built the Viennas to his ideal wheel specs, but they were not going to fit without some modifications under the skin. A combination of SerialNine and T-Demand control arms, wishbones and shortened front spindles have allowed the SSRs to tuck under the arches on compression. I say ‘on compression’ and not ‘aired out’ because Adnan originally ran the car static, on coilovers.

He was a die-hard until the day he picked the LS up from the bodyshop with the freshly-fitted body kit, painted in BMW Individual Ruby Black and Audi Daytona Grey two-tone. The front bumper was toast by the time he got home.

Adnan has since converted to an Air Lift Performance 3H suspension system, set up in this case to drive as low as possible but to air up on rougher roads. With the effort it took to acquire the Junction Produce body kit, I’m not surprised.

Germany is home to one of the strictest road worthiness tests in the world: TÜV. Every part, ride height, camber angle degree must be certified. If not, your plates get taken until you put the car back to stock. That means no driving the car at all. Companies pay hundreds of thousands if not millions of Euros to get parts tested and TÜV approved for sale and use in Germany and Austria. Junction Produce is not one of those companies. Adnan was determined to run this kit however, whatever the cost, and was available to find a “workaround”.

The über-rare exhaust system is TÜV certified as a ‘BBK VIP’ exhaust – Adnan’s own brand he’s set up for the sole purpose of registering certain parts. Those exhaust tips are certainly Fabulous, aren’t they?

The same applies for the wheels. SSR Viennas were never made for the German market, but they are, however, a similar design to MAE Crown Jewels by O.Z. Racing. If you take the centre caps off, they look almost identical, especially with ‘O.Z.’ engraved between the wheel bolts…

I won’t share the final cost of the build, it’s not my place to, but it is substantial. When people find out much it is, they ask why Adnan didn’t just buy an AMG, or an M5, or a Supra. His answer is the same every time: “Because I wanted an LS.”

Adnan really has gone all-out to build his dream car. His eyes genuinely lit up when I approached him the evening prior and asked if it was a Junction Produce kit, and we got talking about the VIP scene. It’s just such a niche choice of car in Germany, that it’s not understood by the car community.

This is a car that was built solely by a man for himself; Adnan doesn’t seek recognition for it. This is his daily driver and he’s never trailered it anywhere. He just uses it to get around, to go hang out with his mates, visit family and enjoy driving.

As I was shooting the car, Adnan came up to me and apologised about the car’s lack of fog lights. “They’re in my storage. If I thought anything like this would happen, I would have fitted them; I just came here for holiday.” He wasn’t even in Wörthersee to attend any shows or to hit any hot spots. He just heard it was a cool place to visit and see some nice cars, so he got his friends and cruised down in his dream machine. That is car culture for all the right reasons. Not too much stress, just enjoying it with the right people.

I have a lot of respect for Adnan and story behind the LS. That’s why it was my favourite car from my trip to Wörthersee, bar none.